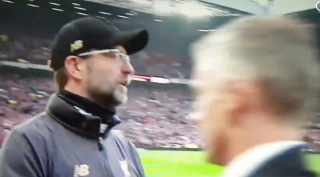 The Liverpool manager watched his side fail to pick up three points from their game-in-hand on title contenders Manchester City, who are currently playing their League Cup final against Chelsea, but they still went a point clear on top of the Premier League.

Klopp approached Ole Gunnar Solskjaer after the full-time whistle was blown and can be seen saying: “F***ing hell, what a s**t game!”

United, on the other hand, dropped out of the top four but are just one point behind Arsenal after Unai Emery’s mean beat Southampton 2-0.

Neither United or Liverpool performed at their best and both managers would agree that the game was a bit on the shit side.