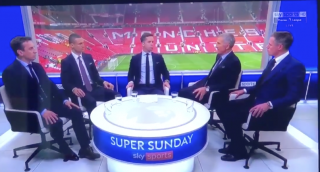 If there was a fight between Nemanja Vidic and Graeme Souness, I’d back the Serb all-day long.

The former Liverpool midfielder left his mount run a bit too long on Sky Sports after the match, claiming “Liverpool made a statement today” which sparked a death stare from Vida.

Neither side performed well and if anything, Liverpool missed a good opportunity to beat United considering all the injuries we suffered in the first-half. It was so bad we couldn’t make another after the break with Marcus Rashford limping around for the rest of the match.

But Vidic wasn’t having any of what Souness had to say… He didn’t even bother responding and the question went to Gary Neville.

Vidic would deck Souness, no contestpic.twitter.com/HDWydPNcxx

So, what sort of statement did Liverpool make today then?

They’re going for the title but couldn’t break down a side fighting for a top four finish, in the process of being cleared out by injuries, and big ones at that.

Liverpool were awful in the final third and didn’t have too much to deal with defensively as United played on with 10 fit players on the pitch.

Looking back at the clip, I’m shocked Vida didn’t take one for the team.

A punch or two from the Serb would knock a bit of sense into him.