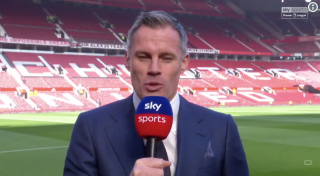 Jamie Carragher laughed off suggestions Manchester United will allow Sir Alex Ferguson to give a team talk before the Reds take on Liverpool.

Liverpool fans have many horrific memories of the great Scot, who set out to knock them off their perch and did exactly that after 26-years in charge of United, and they’re probably fearing the worst knowing his presence may be felt at Old Trafford today.

Sky Sports pundit Jamie Carragher was speaking on Goals on Sunday, and claimed to have seen Bobby Charlton warming up for the game. Chris Kamara chipped in with a claim Bryan Robson is on the bench.

“I’ve just seen Bobby Charlton warming up!” 🏃‍♂😂@Carra23 reacts to the rumours that Alex Ferguson is set to take @ManUtd‘s team talk ahead of today’s clash with @LFC! 🗣

The media and Liverpool are making a bigger deal out of this than United. There had been no talk whatsoever about it until journalists fired questions at interim boss Ole Gunnar Solskjaer on Friday.