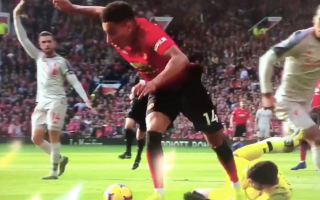 Alisson saved Liverpool in the first-half from conceding a potential game defining goal prior to half-time.

The scoreline remains 0-0 but United have had to deal with injury after injury, before and during the match.

Nemanja Matic and Anthony Martial didn’t travel with the squad which was bad enough until Ole Gunnar Solskjaer had to make three first-half substitutes to replace more injured players.

Jesse Lingard, who replaced Juan Mata, was forced off with a hamstring injury before half-time. Elsewhere Andreas Pereira came in for Ander Herrera and Alexis Sanchez stands in for Lingard.

Even though Liverpool have been the much better side, albeit poor in the final third, United could argue they had the best chance of the first-half.

Lingard had been played through on goal following some brilliant attacking play from Paul Pogba and Romelu Lukaku, and the England star attempted to round Alisson in his own six yard box.

Somehow the Brazilian stuck out a claw and scooped the ball away from Lingard.

It was a great piece of goalkeeping to keep the score level but we need to start creating more chances on goal.