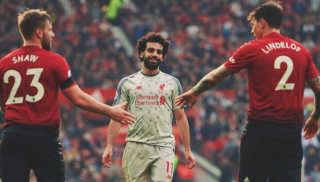 Victor Lindelof has been Manchester United’s most improved player this season.

There is no question about it.

Gone from hardly getting a look in the team to being one of the first names on the team-sheet, The Iceman has been tremendous under Ole Gunnar Solskjaer.

READ MORE: (Video) Matip gets away with horror own goal – linesman calls offside

Like United, Liverpool weren’t completely at the races. Mohamed Salah had another mare at Old Trafford and Sadio Mane didn’t offer a whole lot going forward either.

Lindelof won all of his defensive battles (both aerial battles and tackles), completed 9 clearances and recovered the ball 5 times. He also contributed to David de Gea reaching his Premier League milestone of 100 clean sheets, a record he’s reaches as the seventh player in the league’s history to do it with one club.

He was superb at the back and it’s the second consecutive game that we’ve seen Chris Smalling partner the Swede with great success.

United still need to buy a top class centre-back in the summer, but it will be one to partner Lindelof. No-one else stands close to the Swede at the moment.