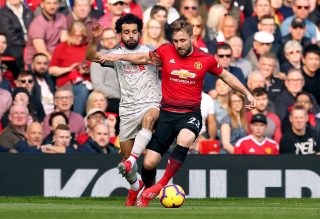 It was a challenging afternoon at Old Trafford. Manchester United had to deal with injury after injury, but still did enough to take a point from their Premier League meeting with Liverpool.

The Scousers were equally sloppy in phases of the game, though they weren’t forced into making three substitutions prior to half-time.

Neither side were at their best, but when you consider the circumstances today and how Solskjaer had to constantly alter his team, Liverpool should see it as a missed opportunity.

You need to win these games when you’re going for league titles.

These tweets rounded up the best of the reaction at full-time. They don’t reflect too well on Romelu Lukaku.

Thought Pogba, Rashford and Lindelof stood out. I was certain a goal was going to come from our left side. Shaw had Salah in his pocket but that meant there was a lot of space for them to play in, with him sticking so tight. Good collective effort to keep them out.

I’d love to see the state of what Fred’s dropping in training.

Rashford played on one leg so United basically had ten men for most of that. I thought Lukaku was terrible really. Don’t really see a future for him at United.

Luke Shaw has been utterly outstanding this afternoon. So much so that Salah has been taken off. Well played.

Luke Shaw was absolutely magnificent and also Pogba who had to change his role after substitutions.

De Gea – Didn’t have a save to make

Young – Passing was all over the show, out of position numerous times – Terrible

Smalling – Decent enough but Mane beat him in the air – how?

Shaw – Excellent, took Salah out of the game

United defended brilliantly and had the best chances despite the upset in the first half. Shaw, Lindelof and Smalling all fantastic. Liverpool had lots of the ball but De Gea barely had to make a save.