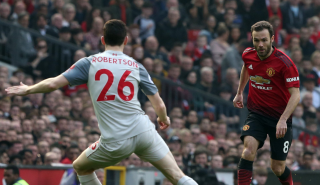 Manchester United players have been dropping like flies against Liverpool at Old Trafford.

The half-time whistle has blown and United have already made two substitutes after making pre-match alternations to deal with an injury Nemanja Matic picked up during training on Friday.

That saw Scott McTominay come into midfield with Ander Herrera and Paul Pogba, though the latter had to be replaced during the first-half due to injury. Brazil international Andreas Pereira was brought on in his place.

However, prior to Herrera’s knock, Marcus Rashford appeared to have strained his hamstring. The England international looked uncomfortable as he limped around the pitch and appeared frustrated when speaking to Ole Gunnar Solskjaer on the sideline.

The only bit of positive news from the first-half is Rashford remains on the bench after running off his knock. We just hope it doesn’t reoccur as United desperately need their in-form attacker on the pitch.

Juan Mata was the second United player replaced in the opening 45 minutes, which forced Solskjaer into bringing on Jesse Lingard, who has only recovered from an injury he picked up in the Champions League against Paris Saint-Germain.

You may think we’re taking the biscuit at this stage, but Lingard was seen grabbing his hamstring before the break and had to come off for Alexis Sanchez.

So, there you go… No more subs with 45 minutes to play, and at the rate our players are dropping, that’s a big issue!

This is an injury crisis! When was the last time a top-flight side had to replace three players before half-time because of injuries?