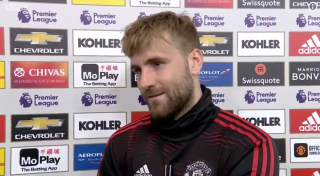 Luke Shaw was one of our better players against Liverpool on Sunday.

Although United didn’t get the win we were feeling optimistic about all week, Ole Gunnar Solskjaer and the players did well to get a point against a side challenging for the title, despite having key players out injured as well as being forced into making three first-half substitutes due to more injuries.

The England international has not only made the left-back role his own this season, with Ashley Young enjoying game time on the opposite flank, he had Liverpool talisman Mohamed Salah in his pocket throughout the game. The Egyptian caused Shaw a nervy moment at the very beginning but didn’t get a sniff after that.

However, with Tottenham losing 2-1 against Burnley on Saturday, we can almost certainly say the title will be headed to the Etihad or Anfield this season.

It may be inevitable but none of us want to think about it, let alone try pick the worst of two evils.

The media will take any opportunity to ask who we’d prefer see lift the title out of City and Liverpool, as Paddy Power did to Eric Cantona, when his answer was similar but more articulate than Shaw’s response to the BBC.

“I think everyone knows who I would pick.”

Luke Shaw is asked the question… #LFC or #MCFC to win the league? #MOTD2 pic.twitter.com/5OfEfKpsaw

“Nah, I’m going to duck it,” Shaw said. “But I think everyone know who I would pick.”S

Nobody knows who Shaw is definitely referring to, but most of us would privately admit to preferring any club over Liverpool winning the title.

Still, it’s never going to be right seeing City win silverware. The same applied earlier when they won the League Cup on penalties.