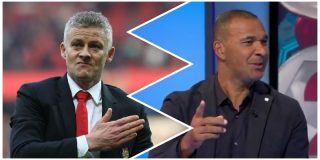 Ruud Gullit has sent a clear message to the Manchester United board about the managerial situation at the club.

The former Chelsea player argued that United have appointed three outsiders since Sir Alex Ferguson retired and all of them were sacked.

He thinks United should take a different approach now, like they did appointing a former player as caretaker manager until the end of the season.

Except that player, Ole Gunnar Solskjaer, is the one Gullit feels should keep the job on a permanent basis!

Ruud Gullit has a message for the #MUFC board.

His arrival was seamless because Solskjaer was already part of the club’s DNA.

Now, with the team’s resurgence under his management, Gullit thinks it’s only right the Manchester United give him the job beyond this season.

Gullit was talking on Match of the Day 2 following United’s scoreless draw with Liverpool at Old Trafford.

Do you think it’s time to give Solskjaer the job or is it still best to wait until the end of the season?