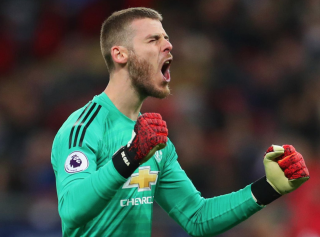 The Spaniard, who is in contract discussions with United, becomes the seventh shot-stopper to do so with a single club.

He becomes the 15th different keeper to record 100, and just the seventh to do so with a single club. pic.twitter.com/ltXJIUcBpU

It won’t surprise anyone that De Gea joins a Premier League hall of fame for clean sheets. He’s the best goalkeeper in the world right now and we’d be lost without him between the sticks.

READ MORE: (Video) Matip gets away with horror own goal – linesman calls offside

De Gea didn’t have much to do against Liverpool today. Jurgen Klopp’s men were woeful in the final third and never really took advantage of United’s injury crisis as three first-half substitutions were made by Ole Gunnar Solskjaer, while Marcus Rashford stayed on for the entire match despite a hamstring strain.

But we’ll take a point and, of course, a clean sheet for Dave. He’d have recorded this stat earlier had our defence not been a complete mess at the start of the campaign.