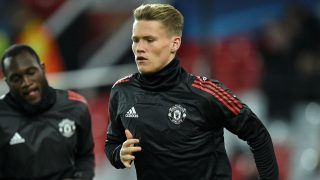 Ole Gunnar Solskjaer has named his starting eleven for the eagerly-anticipated match against Liverpool at Old Trafford today.

A win for the Norwegian would all but guarantee him the permanent manager’s position, as well as denting Liverpool’s title hopes.

Victory for United would also close the gap on third placed Tottenham to just six points, after Mauricio Pochettino’s side suffered a shock defeat at Burnley yesterday.

Nemanja Matic is ruled out of today’s game, after picking up an injury in training yesterday. Scott McTominay replaces the Serbian in midfield.

Chris Smalling retains his place in defence after an excellent comeback performance in United’s FA Cup victory over Chelsea on Monday night. Unsurprisingly, David De Gea returns in goal, after being rested in the FA Cup.

Ander Herrera and Paul Pogba will look to continue their excellent run of form in midfield in what will be a tough test against Jurgen Klopp’s side this afternoon.

Romelu Lukaku starts and it looks like Juan Mata could play in behind the Belgian and Marcus Rashford.

Meanwhile, Anthony Martial is still unavailable for selection with a groin injury.

Two changes from our victory over Chelsea…