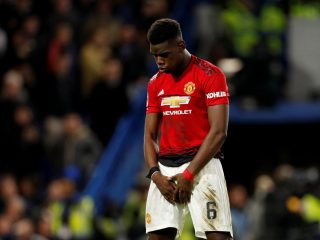 Paul Pogba is in great form and enjoying his football now at Manchester United. There’s way less speculation that he could be sold in the summer, ever since José Mourinho was sacked as the Franch international found a new lease of life under caretaker manager Ole Gunnar Solskjaer.

Perhaps Pogba’s displays of late caught the eye of Real Madrid, who Don Balon claim are keen on signing the 25-year-old and bringing him to the Santiago Bernabeu.

While that would appeal to most footballers, Pogba looks at his happiest since re-joining Manchester United from Juventus in 2016. Solskjaer, who coached him as a youth player, knows and understands the type of player he is.

Real Madrid are bound to be assessing midfield targets with Luka Modric now 33-years-old, and they’re not going to replace the Croatia with any second-rate budget signing!

The dressing room is very much Pogba’s to use his influence as a top player. Mourinho has left and so has the dire working environment that developed over time.

Solskjaer’s arrival has brought the best out of Pogba, with the midfielder contributing nine goals and six assists in 12 appearances across all competitions.

The report also states that Real Madrid are ready to spend up to €150 million to land Pogba, and that the player already rejected advances from rivals Barcelona, which is a claim that went under the radar in British press.

Pogba would be a huge signing for Real, but we’re only getting to see him at his best now. He has unfinished business at United and should look to sign a long-term contract.