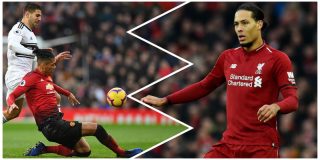 Nemanja Vidic will be in the Sky Sports studio for Sunday’s Premier League meeting between Manchester United and Liverpool at Old Trafford.

The former United defender knows what the fixture means to everyone involved, and his analysis of how both sides defend will be intriguing, especially if his pre-match comments are anything to go by…

He claims he would not trade any current United defender for Liverpool’s Virgil van Dijk.

The Netherlands international will return to the Liverpool line-up at Old Trafford after missing their midweek game against Bayern Munich in the Champions League through suspension.

Van Dijk will be up against the creativity of Paul Pogba and sheer pace of Marcus Rashford, not to mention the possibility of Anthony Martial returning from injury in time.

And, there’s little reason to believe he won’t be able to cope with United’s much improved attack.

The Dutchman has proven to be a vital component to Liverpool’s title challenge this season, offering defensive stability and making Jurgen Klopp’s side a greater unit, even if they’re less flamboyant going forward.

Despite this, Vidic insists he would favour Ole Gunnar Solskjaer’s current options at the back.

Speaking to Omnisport, he has been quoted by Yahoo Sport: “He [Lindelof] has some quality definitely. He has done really well. I think Phil Jones did well in the recent games he played, Chris Smalling is a good defender, [Eric] Bailly as well.

“Overall, I said even before when they didn’t have great games, if you look at the other teams, I would not have any defenders of Liverpool or Chelsea, I don’t think they have better defenders than we have.”

On Van Dijk, the former United man added: “He’s a great defender, top defender, but I’m saying when teams are going well, everyone gets recognition.”

It’s a stretch to suggest there is a better centre-back than Van Dijk in the Premier League right now. He was the missing piece to Liverpool’s jigsaw and they’ve really kicked on since his arrival last year.

Lindelof is the only centre-back at United doing himself justice this season, though Smalling was excellent on Monday night against Chelsea.

That would be the defence duo of choice if I had my way on Sunday, but Solskjaer could call upon Bailly to partner the Swede, just to keep up with Liverpool’s pace in attack.