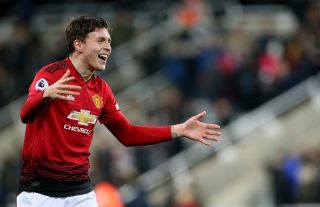 Manchester United have a chance to grab a greater hold on fourth place on Sunday and in doing so we face title contenders Liverpool.

United recently beat Chelsea 2-0 in the FA Cup in a dominating display, but Sunday should be tougher.

Liverpool are much stronger this season even if they are less flamboyant in attack, and Virgil van Dijk returns after being suspended for their Champions League clash with Bayern Munich on Tuesday night which ended 0-0.

But who will start in defence for United? Sweden international Victor Lindelof has been a monster at the back and walks into the team, but Ole Gunnar Solskjaer has yet to identify a fitting partner for the former Benfica defender.

It begs the question – will Solskjaer stick with Chris Smalling or hand another chance to one of Phil Jones or Eric Bailly?

With this being a huge game, having a lot at cost, Solskjaer needs to be sure about who he picks.

We ran a poll on Twitter and 921 voted with 52% saying Ole should opt for Smalling, with Bailly (44%) coming in second.

POLL: Ole Gunnar Solskjaer has a decision to make in defence against Liverpool.

Who should partner Victor Lindelof at CB on Sunday?

Despite receiving a new long-term contract not long ago, Jones (4%) is the least popular option from the three, yet he’s played more under Solskjaer than a fit Bailly. He was also preferred to Smalling by England manager Gareth Southgate last summer for the World Cup partly because he is considered better on the ball than his United teammate, and that could be a factor against Liverpool’s pressing game.

Smalling, the mere favourite according to the poll, was excellent on his return from injury in United win over Chelsea. It was the strongest partnership with Lindelof we’ve seen since since Solskjaer arrived, potentially being a factor ahead of Sunday’s selection.

As for Bailly, while he is rash and prone to hearing from referees, his pace could be an essential tool to cope with Sadio Mane and Mohamed Salah.

Here are a selection of responses we got from the tweet.

Bailly, he’s a walking red card in this fixture

I’d go Smalling on the back of his Chelsea display. Jury still out on Bailly and Jones hasn’t done it for me.