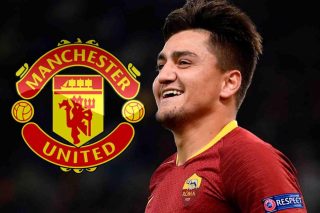 Manchester United are being linked with AS Roma winger Cengiz Ünder following a report from Italian newspaper Repubblica, cited by Calciomercato.

The report states that United are one of four Premier League clubs interested in the 21-year-old, as well as Bundesliga champions Bayern Munich.

Arsenal, Chelsea and Tottenham are all said to be monitoring the Turkey international, who has 4 goals from 10 caps for his country.

United already have options on the right flank, but none of them could be considered a specialist winger.

Jesse Lingard is best at roaming around attacking positions and creating space, while Juan Mata hasn’t got the legs for such a demanding wide role and is better deployed behind two strikers in a 4-4-2 diamond formation.

Then there’s Romelu Lukaku, who did exceptionally well on the right against Arsenal, but you wouldn’t play a centre-forward out wide on the right every week. Not one lacking in mobility.

But transfer rumours do the rounds constantly with agents trying to build their client’s profiles. A lot of people never heard about Ünder before today, when speculation regarding United, Chelsea, Arsenal, Spurs and Bayern emerged.

Below, you’ll see his best bits from this season – which display a direct winger with lightening pace, always looking to beat his man.

Worth keeping an eye on, anyway!