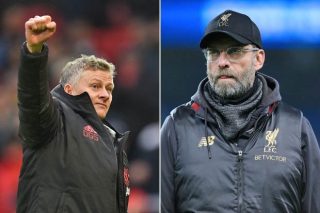 The biggest game in football kicks-off this weekend when Manchester United host Liverpool in the Premier League.

Prior to the Friday morning press conference, caretaker boss Ole Gunnar Solskjaer gave an exclusive interview to MUTV, revealing that Anthony Martial and Jesse Lingard could both return from injury for the game.

The pair picked up two different injuries in the Champions League defeat against Paris Saint-Germain, and it wasn’t initially expected that they’d be fit to face the Scousers.

“I hope and think Anthony Martial will be ready and I hope Jesse will be ready because it’s two different injuries,” Solskjaer explained to the press, as quoted by The Mirror.

“So maybe more hope than think, with Anthony as well, but he’s got a chance. Anyway, we still hope Jesse could be ready. Let’s see. We’ve still got a couple of days training left and they need to be part of it.”

Solskjaer would welcome a certain guest speaker to meet his group of players, should ‘the gaffer’ intend on doing so.

“It would be welcome to have him [Sir Alex Ferguson] talk to the players if he wanted to, the gaffer. We know how much it meant for him to overtake Liverpool.”

As a member of successful United teams, Solskjaer knows more about the rivalry than a lot of our players, through experience and fierce battles. He was adamant that the fixture is not about emotions.

“I played a few of these myself and know the magnitude of it for the fans, everyone who works here, the staff. There have been many comments this is the big one, then it’s our job to be focusing and channelling all that energy into performance mode when we start the game on Sunday.

“It’s not about emotions, I understand emotion can be brought into it but we have to stay focused and controlled with some fight in us as well.”

And, as you’d expect, Solskjaer couldn’t care less about the title fight. Why would he when it doesn’t concern Manchester United?

“I’ve not really focused on the teams or what they’re doing. I’m focusing on us and what we have to do to get to where we want to be. It’s a three horse race for the title and fourth – that’s my focus.”

Solskjaer was calm throughout the press conference and was happy to provide the brief update on Lingard and Martial. Many did question his comments after both players picked up knocks, suggesting he was taking a copy from Sir Alex Ferguson’s book by playing mind games with Liverpool.

However, the Norwegian is not one for mind games…

“I don’t think Jurgen Klopp will read what I say, I’m not gonna read what he says.”

All quotes from Solskjaer’s press conference came from The Mirror.