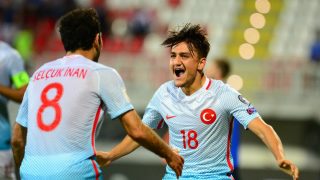 Roma winger Cengiz Ünder continues to impress in Serie A and has put a number of top clubs including Chelsea and Manchester United on red alert.

United should definitely be in the market for a specialist winger in the summer for the right flank. The left has enough cover with Anthony Martial and Alexis Sanchez, though the opposite wing lacks an out-and-out wide player.

The Reds then opt to squeeze players like Jesse Lingard, Juan Mata or Romelu Lukaku on the right despite all of these players being better in different positions, so it has a negative effect on the pitch as we look predictable constantly looking to attack down the left as opposed to the right.

But with an eye for goal, Cengiz Ünder may have something United are missing in that position. He is showing his ability on the international stage too, with four goals in just 10 caps for Turkey.

However, Calciomercato cite a concerning report from the paper edition of Repubblica, suggesting a number of European giants are lining up offers to prise him away from Roma. They include Chelsea, Manchester United, Arsenal, Tottenham and Bayern Munich.

It that list of clubs showing interest doesn’t turn the head of a 21-year-old, I don’t know what will…

Though this is mere transfer gossip for now. United need an answer to their problems on the right flank this summer, but there are more exciting prospects out there if the club is willing to give the next full-time manager a healthy transfer kitty.

There is no mention of a valuation for the player in the report, although Transfermarkt.com claim Ünder is worth €35 million.