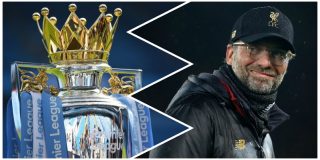 This week we spoke to Empire of the Kop’s Jordan Chamberlain to discuss Liverpool ahead of their trip to Old Trafford on Sunday.

The thought of that lot winning the league is borderline soul destroying but we can do our bit to push Liverpool off track this weekend. Why not make that 29-year wait 30, 31, 32 and beyond?!

Anyhow, credit to Jordan for agreeing to answer our questions below. Tweet him here: @Jordan_AC90

Liverpool are genuine title contenders but in recent games it looks like they’re beginning to crack a little due to the pressure of ending that 29-year wait. Will you slip again or take the crown from City?

F*ck knows, mate. Nobody does! I don’t think Liverpool have cracked, though. They drew two games and got back on track with a good win v Bournemouth. When City were losing to Leicester, Palace and Newcastle, nobody said they were cracking under the pressure – it was just another game. If our best players all stay fit, and the fans do their bit in every home game, we’ll be there or there abouts.

Liverpool are a better side this season but are less flamboyant going forward. Why do you think Salah and co aren’t doing as well as last season?

Salah is top scorer in the PL… Mane is one off double figures without penalties, as is Firmino. They haven’t scored as many, but that’s more to do with a pragmatic team approach than an individual drop off. Klopp has been told by everyone (mainly rival supports, actually) that he has to win something – so he’s calmed down the offence, tightened the defence and organised a football side that doesn’t need to score three goals to win matches.

Fast forward to the end of the season – would you be happier with a Premier League trophy or the Champions League?

Premier League. I genuinely watched the Champions League Last 16 with Bayern Munich with a bizarre feeling that I didn’t care that much. The chance of title glory is just too much.

This was brilliant from the Bayern fans.👏

How do you see the match going?

First goal wins. If Liverpool score it, I think we’ll go on to win 2-0. If United score it, Old Trafford is going to be a real cauldron considering it’s become your most important domestic match of the season – and it could be tough for the Reds to get a foothold back in the game. I’m going 0-0.