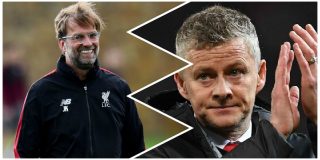 The rivalry between Manchester United and Liverpool does not get in the way of Jurgen Klopp’s appreciation for Ole Gunnar Solskjaer’s work this season.

Back in December when José Mourinho was axed, Solskjaer came in to steady the ship but has done even more than that. United are now in a strong position for a top four finish and have qualified for the FA Cup quarter-finals after beating Arsenal and Chelsea in the competition, both ties away from home.

To get praise from one of the best managers in the league is always nice, but if Solskjaer continues to impress and gets the job on a permanent basis, it might not be long before his United side overtakes Liverpool to compete for Premier League titles again.

That’s the ideal plan but as we’ve seen with previous managers it doesn’t always go that way. While David Moyes was a disaster from start to finish, Louis van Gaal and Mourinho both had the pedigree required to take on such a job.

Solskjaer hasn’t got that experience but he has something else. Manchester United DNA.

Speaking to the press before Liverpool travel to Old Trafford this weekend, Klopp singled out Solskjaer with some praise, as quoted by the Liverpool Echo: “It must be one of the best records ever, mustn’t it?”

“I’m really happy for him. It’s not the best news for us but for all Manchester United fans its brilliant.

“They’ve brought in all the things Sir Alex Ferguson stood for with all the new things in football.

“That makes them a threat again. They are really back on track. Good for them.”

Klopp was then asked about luck in management, following the initial question on Solskjaer.

“We all needed luck in our managerial careers.

“When I went from Mainz to Dortmund people said I had no international experience. It was true.

“Normally you would not make a move from Norway to Manchester United. That is clear. But he’s shown his qualities.

“He has the quality and the luck in the right moment. Now he’s in charge and there is no doubt he will be the manager next year as well. That is clear.

“Can you imagine if they brought in a new manager? He deserves that 100%.”

Bit weird of Klopp to dive into the appointment process at United. Unnecessary, even.