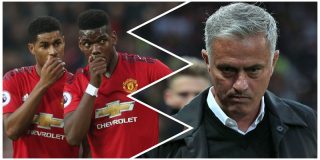 You don’t need stats to see a significant improvement in most players under interim manager Ole Gunnar Solskjaer.

Though some impressive numbers, especially in comparison to José Mourinho’s spell at the club, shouldn’t be ignored as fans continue to decide who is best to take the manager’s job on a permanent basis.

These stats prove the club made the correct decision to get rid of the former Real Madrid and Chelsea manager.

For instance, Paul Pogba has been magnificent in midfield for a player who didn’t look the slightest bit interested when Mourinho was in charge. Should the Frenchman retain this level of performance and show more consistency, there will be less doubt over his ability to be the best midfielder in world football.

His partner for many attacks in the final third, Marcus Rashford, has also become United’s main goal threat in the centre-forward role. The England international has done so well of late, it’s no wonder Romelu Lukaku lost his place in the team.

The United duo have played together three less games in the Premier League than in the first half of the season, when Mourinho selected both in the same team 11 times.

They only managed to create two games for each other under the Portuguese tactician, but that has jumped to a further 12 chances since Solskjaer came in.

That shouldn’t come as a surprise to anyone considering United’s new approach in games – to attack the opposition and create endless chances. At least one of them is bound to go in.

The pair never assisted one another during the first-half of the season either, however, in the last 8 league games they’ve managed three.

Check out all the stats below, provided by Sky Sports.