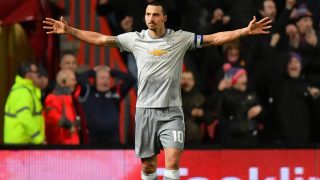 We always said it was a shame Zlatan Ibrahimovic didn’t become a Manchester United player earlier in his career.

I, for one, took to the Swede immediately after he joined United in 2016. His entire persona reeked of charisma and it was clear he didn’t come here for one last big pay day after Paris Saint-Germain.

READ MORE: How caretaker managers worked out for other clubs, while Man Utd consider Solskjaer for full-time job

It didn’t take the Old Trafford faithful long to come up with a chant for the striker either:

Zlatan Ibrahimovic, he is a Swedish hero,

Six foot five, hard as f***, he gets the Reds excited,

‘Cause we are Man United.

Ibrahimovic has now admitted he had no interest in joining another English team. Manchester United felt like the only right fit.

In an article published on ManUtd.com, Ibrahimovic expressed his admiration for the club and how he viewed a move to the Premier League after being successful in the Netherlands, Italy and France.

“I wasn’t always sure that I would play in England, but when I took the decision that I would, I was very clear in my mind that there was only one team I would play for,” Ibrahimovic reveals.

“Of course, I was always aware of United. The person who doesn’t know about United is the one who hasn’t heard what football is. Everybody that knows football knows who United are. I remember watching them, of course. I remember 1999, against Bayern Munich, that crazy Champions League final. I remember Teddy Sheringham came in and scored, Solskjaer scored, and they went from losing the trophy to winning the trophy in a few minutes. Of course, it was more than 1999.

“I had a pretty good eye on United, always. There were waves and waves of success that you remember, Ferguson dominating the Premier League.

“And they were always in these red shirts…

“I thought to myself: I can carry that shirt very well because it’s not too heavy for me.”

Ibrahimovic: “I wasn’t always sure that I’d play in England, but when I took the decision, I was very clear in my mind that there was only one team I would play for. United. That is the team I want to shine with. That is the team that fits me.” #mufc [MU] pic.twitter.com/QdTPFfPuh5

Ibrahimovic is still playing for LA Galaxy in the MLS scoring wonder-goals, something I don’t think he will ever stop doing as long as he plays.