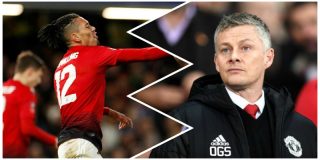 Manchester United face Liverpool in the Premier League this weekend and Ole Gunnar Solskjaer will hope he has found his best defensive partnership in time.

Chris Smalling and Victor Lindelof may not get most of the credit for Monday’s win over Chelsea in the FA Cup, but the pair were impressive in the heart of United’s defence.

This comes with little surprise for the Swede, who has been United’s most improved player this season, especially since Solskjaer replaced José Mourinho, though even before that Lindelof was showing clear signs of improvement from his debut season.

Mourinho made it clear when he was in charge that United needed to improve defensively. None of his targets were landed in the summer, which undoubtedly contributed to his unbearable dour demeaner.

But the best coaches try to get the best out of players before making excuses.

While United still need to go out and sign a world-class defender in the summer, Solskjaer must find his best defensive partnership between now and the end of the season.

The spot beside Lindelof has been vacant since his form significantly improved. Phil Jones and Eric Bailly both had runs in the team with neither making a strong enough argument to keep their place, which immediately opened the door for Smalling to earn his place back in the team after being out with injury.

After Monday night’s performance by Smalling, the boss will be under no doubt who is best to partner Lindelof in defence against Liverpool on Sunday and potentially beyond.

Liverpool are a better side than they were last season, even if they’re less flamboyant going forward. Klopp made clever signings to ensure his side would improve defensively, with Virgil van Dijk leading at the back, but they too will come under pressure against United’s newfound attacking approach.

However, reflecting back on our 2-0 win over Chelsea in the FA Cup, Smalling and Lindelof were rarely tested with the ball at their feet and that won’t be the case against Liverpool’s high and intense pressing game.

Both defenders will need to replicate their performance from Stamford Bridge as well as build on it. That would surely give Solskjaer little choice but to stick with Smalling alongside Lindelof until better options become available.