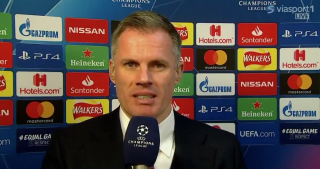 Jamie Carragher was working for Viasport on Tuesday night for their coverage of the Champions League.

The former England international was at Anfield for Liverpool’s scoreless draw with German champions Bayern Munich.

They would have wanted a win last night before their massive league encounter at Manchester United on Sunday.

Carragher expressed his fear for Liverpool ahead of the return leg in Germany, stating that he thinks Bayern will attack more at home than they did on Tuesday night.

A win over United would lift Liverpool three points clear of Manchester City at the top of the table, but Carragher is aware of Liverpool’s poor recent record playing at Old Trafford.

Their last win at the Theatre of Dreams was back in March 2014. Goals from Steven Gerrard and Luis Suarez secured a 3-0 win for the Scousers.

Carragher reckons United’s new attacking approach could open up space for Liverpool’s attacking trio to exploit, but says it will be difficult as it is against a side full of confidence.

.@Carra23: – A goalless draw is the best draw you can get.#ViasportFotball pic.twitter.com/XgnEqxKZz2