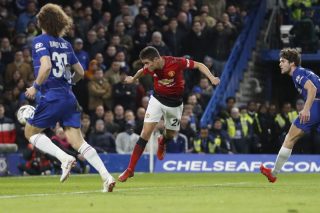 Manchester United’s FA Cup quarter-final at Wolves will be screened live on BBC 1’s Match of the Day on Saturday, March 16 at 7.55pm, confirmed by The FA.

At Stamford Bridge on Monday night, United fans hit out at TV companies like the BBC by revealing a banner which read ‘Magic of the Cup? Sold by the FA for Monday night TV cash’.

Banner unfurled in the away end reads: “Magic of the Cup? Sold by the FA for Monday night TV cash.” pic.twitter.com/MR8H6AMRoH

READ MORE: Zlatan Ibrahimovic: Man Utd the only English team I would play for

In the previous round of the FA Cup, the same group of United fans were expected to travel down and back to London for a Friday night encounter.

Moreover, the Reds are yet to play an FA Cup tie at 3pm this season, the traditional time for matches in England.

Winning the FA Cup would go a long way towards helping caretaker manager Ole Gunnar Solskjaer land the job on a permanent basis. The league is our bread and butter and there’s been a massive turn around in that, as United finally join the top four, but a triumph in the cup would be the icing on the cake.