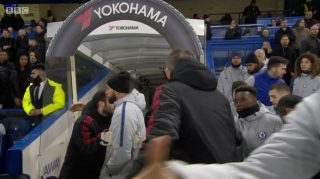 Ole Gunnar Solskjaer appeared to make a special approach to Callum Hudson-Odoi after Manchester United’s comfortable win in the FA Cup Fifth Round.

First-half goals from Ander Herrera and Paul Pogba saw United progress into the quarter-final, with an away trip to Wolves on the cards.

Hudson-Odoi has played just 19 minutes since the January transfer window close after attempting to force a move to Bayern Munich. It would have been a similar move to Jadon Sancho leaving Manchester City for Borussia Dortmund as the youngster believes he would get more game time in Germany.

The Chelsea fans chanted Hudson-Odoi’s name to come on at Stamford Bridge but manager Maurizio Sarri ignored their call before they turned on the Italian coach. They sang ‘Fuck Sarri-ball’ and ‘You don’t know what you’re doing’ in response.

In an ideal world for the Chelsea hierarchy, Hudson-Odoi would sign a new contract because there’s just a year remaining on his deal this summer.

But it sounds like the player is intent of leaving the London club.

United have yet to be linked with a move for the talented Chelsea youngster, but that may soon change after Solskjaer was seen approach Hudson-Odoi after the final whistle on Monday.

Solskjaer shook hands with Sarri after the game and then with Hudson-Odoi before having a quick word with the young attacker.

United need a new wide man on the right, so who knows?