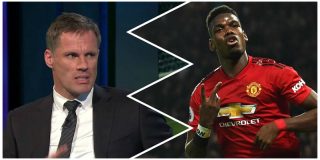 Jamie Carragher has been made eat his words, but at least the Sky Sports pundit admitted he was wrong as Paul Pogba continues his amazing resurgence under Ole Gunnar Solskjaer.

The France international was brilliant again making one goal and scoring another as United knocked FA Cup holders Chelsea out in the Fifth Round.

Pogba started to show his best form in a United shirt following the sacking of José Mourinho in December, and he’s not the only attacking player to flourish since then, forcing Carragher to rethink his criticism.

“I don’t think if he’s worth the hassle for what he gives on the pitch. And there’s an idea that it’s one or the other. If Mourinho goes you won’t see a new Pogba, I can assure Manchester United fans of that,” Carragher told Sky Sports back in September, at the beginning of the season, as quoted by The Independent.

“He’s not as good as he thinks he is. He’s got talent but his big problem is his understanding of the game. It’s been a problem since he arrived and it hasn’t changed now.”

Jamie Carragher couldn’t have been more wrong about Paul Pogba if he tried🤦🏻‍♂️ pic.twitter.com/svnRYca9BA

Well, thankfully the club didn’t take Carragher’s word for it, though you’d be naïve if you thought United definitely wanted to keep Pogba beyond this season prior to his resurgence. It was very much in the air and these comments from Carragher may seem laughable now but they weren’t in September.

The Frenchman was on thin ice before turning his United career around exceptionally. Sunday’s clash with Liverpool will see a real test in character for Pogba too and previous displays should have most feeling optimistic regardless of the Scousers’ position in the table.

After being reminded of his quotes back in September, Carragher was quick to change his tune.

“Well I hope you completely disagreed at the time & not just now?!!!,” he said. “He’s been a revelation since OGS came in because he’s basically let him play without defending.

“I didn’t see this turn around so I have no problem saying I was wrong.”

I hope @GNev2 or someone reminds @Carra23 of his poor take on Pogba from a couple of months ago. pic.twitter.com/aafut0WKrR

But I won’t change my stance that Pogba should have delivered a lot more for Man Utd/Jose in those first two years no matter what the system or set up.