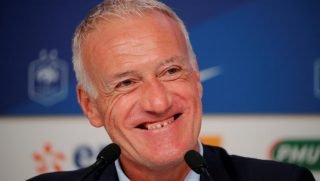 It became clear over time Martial had a strained relationship with former manager José Mourinho and he stopped performing at the same level as a result, but that is no longer the case.

The same could be said about fellow France international Paul Pogba, who has been United’s main threat in midfield since Mourinho’s sacking in December.

But Martial was left out of France’s 23-man squad that won the 2018 World Cup. Deschamps couldn’t pick a player who found his opportunities in the second half of last season limited by the arrival of Alexis Sanchez from Arsenal to United.

And, it didn’t look good for United that Martial, one of the most exciting young players in football, lost his place in the French squad now knowing a lot his hardship came from dealing with Mourinho.

It even got to the stage that losing Martial became inevitable due to Mourinho’s treatment of the player, yet he’s completely flourishing now under Solskjaer.

Speaking at the Laureus World Sports Awards in Monaco, Deschamps said: “It’s always difficult to know what can happen but all players can have a period when they are less successful on the pitch,” as quoted by The Standard.

“It’s certainly related to confidence, it can be related to the relationship they have with their coach. It happens every season, for all players.

“Anthony Martial is back at a very, very good level.

“He’s often decisive. He had some physical problems too. He is a player who was with us at Euro 2016, he was not there for the World Cup but he is one of the players we regularly follow.

“He is a young player who is gaining maturity also because he started very early in Manchester United and with the French national team too.

“There are always difficult moments but in terms of potential, he has everything you need to be at the highest level.”