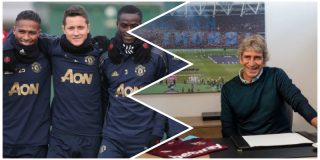 Antonio Valencia will be out of contract this summer and there is no sign of him being offered a new deal, meaning the Ecuadorian could be available to other clubs on a Bosman deal.

The Sun believe West Ham are preparing to move for the right-back, if Pablo Zabaleta, formerly of Manchester City, decides to retire at the end of the season.

The tabloid makes it clear they want Zabaleta to stay but the 34-year-old has yet to announce if he plans to play on beyond this season.

It appears as though Valencia tops Manuel Pellegrini’s list of replacements for the Argentine, even though the Manchester United captain turns the same age as Zabaleta in August.

Pellegrini must see experience as key at the back and they’ve had a decent season to be fair.

West Ham are 10th in the Premier League after a questionable start to the campaign. Breaking into the top 8 could be too steep a climb for the Hammers, but it will be good for the team to finish where they are currently in the table.

Valencia, on the other hand, has been at United for over 10-years acting as a good servant to the club.

But his time at Old Trafford is finished. He can’t get up and down the line like he did before and the defensive side to his game isn’t top level.

This story is worth watching. There could be something in it!