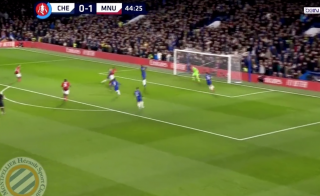 Paul Pogba has doubled Manchester United’s lead in their FA Cup Fifth Round encounter with Chelsea just before half-time.

Always a perfect time to score (when isn’t?) but like the first goal, it came from a cross out wide.

This time our star in midfield, Paul Pogba, evaluated a clever run into the box before heading home, and what a cross it was by Marcus Rashford.

The London side always have a League Cup final against Manchester City in the near future. They need to show some sort of response in the second-half to give the manager any hope of lasting until then.

But the game is far from over, as we seen at Stamford Bridge earlier this season.

Made one. Scored one. #Pogba