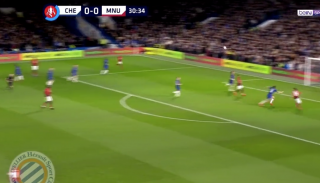 Ander Herrera has opened the scoring at Stamford Bridge just after the half-hour mark.

The Spaniard has been excellent tonight – picking up great defensive positions and, of course, putting Manchester United ahead in their FA Cup Fifth Round tie against Chelsea.

It shows he’s there tonight to do a job in both halves of the pitch, suggesting Ole Gunnar Solskjaer has more faith in the midfielder than previous managers.

Herrera simply wonders into the Chelsea box without a defender noticing his run. A stunning ball from Paul Pogba dips in towards the back post for his Spanish teammate to convert.

Chelsea boss Maurizio Sarri won’t be happy with how his players defended in the lead up to the goal.

As for the game game, it’s been a close one but not as cagey as last season’s final.

Chelsea have forced Sergio Romero to make a number of saves and the Argentine has done well in David de Gea’s absence (on the bench).