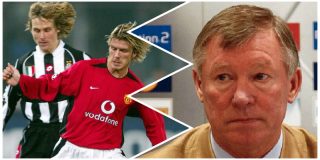 As one of the European greats I watched growing up, Nedved is one of the first footballers I think about whenever someone mentions Juve. He was one of five players who remained at the club when they were relegated to Serie B in 2006 following the Calciopoli scandal. The only non-Italian.

A player of Nedved’s quality could have left. Manchester United were one club who made an offer for the Czech Republic icon but a deal never materialised, and you can be sure other clubs sniffed around the possibility.

“I’ve always appreciated English football and the Premier League, I’ve always liked it,” Nedved told Jason Burt of the Telegraph. “My agent received some offers and I have always been a great supporter of Manchester United and Sir Alex Ferguson, specifically, at that time. They were certainly one of our greatest opponents and also a great source of inspiration and drive and desire. He [Ferguson] achieved great things, unprecedented things and I don’t know if anyone else in the future will be able to achieve what he did.”

Nedved doesn’t elaborate on the offer – how long it was worth, wage fee proposed or even why he decided to reject a move to Old Trafford.

Perhaps he’s just another branch on the same tree as Paul Scholes, Gary Neville and Ryan Giggs when it clubs to club loyalty after falling in love with Juventus following his switch from Lazio.

The Juve hero, who was part of their Champions League squad in 2003 which finished runners-up, has reflected on mega-money signing Cristiano Ronaldo after his first couple of months in Turin.

“With Cristiano Ronaldo joining it has improved the mentality,” he added. “There always was a strong, winning mentality but there is something that he has brought which has influenced the rest of the team, that has affected them and has made them even more confident.

“We knew him as a player but now we know him as a person and we’ve all been really impressed by his personality, his character. He is much more than a player. The way I describe Juventus is that it exactly matches with him. Ronaldo is a Juventus player. It’s a perfect fit and it is the perfect mentality.”