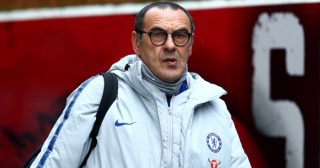 Chelsea started the season strongly and even looked like title contenders but ‘Sarri-ball’ is proving to be a bit of an issue at Stamford Bridge following their gentle slide down the table.

Maurizio Sarri’s time at Chelsea could depend on their next two matches – Manchester United in the FA Cup and a League Cup final against Manchester City.

The Italian may well be the next Premier League manager to get the axe.

There’s displeasure in the stands and Roman Abramovic is as ruthless as they come. He’s not going to take long to warm to the idea of replacing Sarri with European football legend Zinedine Zidane.

Chelsea are currently 6th in the league, one point adrift of fourth, and run the risk of missing out on the Champions League again.

In fact, the FA Cup clash on Monday night is a huge one for both managers. Ole Gunnar Solskjaer has turned United’s season around since replacing Jose Mourinho two months ago, and it’s an audition for the former striker between now and the end of the season.

Solskjaer could be the one to put the sword to Sarri with a win at Stamford Bridge tonight. It will help, despite having injuries of our own, if Sarri continues playing N’Golo Kante, Marcos Alonso and perhaps Eden Hazard in unfamiliar roles.

Mind you, in our last 25 visits to Stamford Bridge across all competitions, United have only won three times, drawing eight and losing 14. A terrible record that needs changing if we’ve any chance of reaching the FA Cup quarter-finals.

The Chelsea boss has also been put under pressure by young English star Callum Hudson-Odoi, who clearly tried to engineer a move to Bayern Munich during the winter transfer window. Sarri has been criticised for not starting the wantaway winger.

It looks like Hudson-Odoi will be headed in the same direction as Hazard this summer – through the Chelsea exit door, and that will be a huge blow for Sarri or whoever replaces him.

While he needs time, he won’t get it.