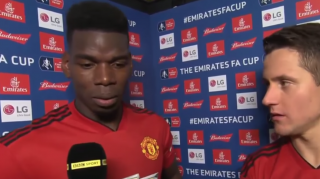 Paul Pogba was magnificent yet again as United defeated Chelsea to reach the quarter finals of the FA Cup.

The Frenchman was instrumental in both United goals, providing a superb assist for Ander Herrera’s opener, before turning goalscorer when he met Marcus Rashford’s cross with a powerful header on the stroke of half time.

“It is a beautiful win. Today was a great performance from the team, all of them. It wasn’t easy. We did it. We are really pleased with that win.
“The team helped me get to my best. I give everything for them. They help me score goals and get assists,” Pogba told the BBC.

“We are enjoying playing together. We are Man Utd. We play to win trophies. He [Solskjaer] took this job because he can do it. He trusts us and we trust him.”

United’s victory was perhaps their most impressive under Ole Gunnar Solskjaer. The Reds were dangerous in attack, but also resilient in defence, nullifying any Chelsea threat to Sergio Romero’s goal.

Solskjaer’s side were rarely troubled in the second half, and looked comfortable in holding out the FA Cup holders.

United have been handed another tough draw, this time against high-flying Wolves in the quarter finals. If the Reds are to go all the way in this year’s competition, it will not have been done the easy way.