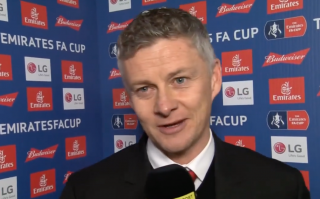 Ole Gunnar Solskjaer was delighted with his side’s performance as United defeated Chelsea 2-0 at Stamford Bridge to set up a quarter final tie away to Wolves.

The Norwegian also ruined Newcastle legend Alan Shearer by reminding the former Newcastle striker who won the FA Cup in 1999.

“The performance tonight was fantastic, our tactics worked. We asked our midfielders to press higher and get into the box and it worked. The defending in the second half was fantastic,” Solskjaer told the BBC.

“Chelsea are a good team, they have their way of playing but Juan Mata did a fantastic job on Jorginho and we were absolutely perfect defensively.”

Solskjaer’s side have reached the FA Cup quarter final the hard way, with deserved wins away to Arsenal and now holders Chelsea. Their route to the FA Cup final is getting no easier with Wolves next up at Molineux.

“An away tie again after Arsenal and Chelsea but that’s it. We’ll have to do it the hard way, Wolves are a tough team to play against.” Solskjaer added.

Herrera had Pogba to thank for United’s opener; the Frenchman’s sumptuous cross nodded home in a fantastic move after Chelsea were forced into giving the ball away. Pogba turned goalscorer on the stroke of half time, meeting Marcus Rashford’s Beckham-esque cross in a classic United counterattack.

This result surely has to put Solskjaer in pole position to be confirmed as permanent manager. United showed not only their brilliance going forward, but their aggression, dominance and organisation in defence culminated in their best performance under the Norwegian.

The Reds face title-chasers Liverpool on Sunday, in what is another huge game in the race for Champions League positions.