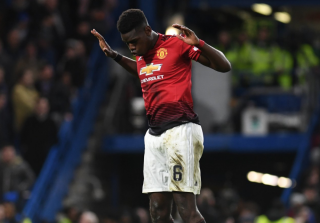 Ole Gunnar Solskjaer’s Manchester United returned to winning ways against Chelsea with a 2-0 victory that will allow supporters to forget midweek disappointment. Two brilliant contributions from Paul Pogba ultimately made the difference, as he teed up Ander Herrera for United’s first goal and finished a Marcus Rashford cross to double the lead at Stamford Bridge in the first half.

The win, United’s first at Stamford Bridge since 2012 and only second since 2002, featured a disciplined tactical performance that deserves to be remembered as one of the best of the season, as reflected in tonight’s player ratings.

Romero made an excellent double save at 0-0 to deny David Luiz and Pedro. He earned his clean sheet despite being relatively untroubled over the 90 minutes.

Struggling with the double-threat of Eden Hazard and Mateo Kovacic early in the match and picking up a yellow card in the process, he recovered well and rewarded Solskjaer’s somewhat misplaced faith in him in the second half.

Perhaps the most surprising name on the team sheet produced a solid defensive display on the night, making few errors and staking his claim for a place in the side next season. He may pass Phil Jones in the pecking order for the final place in United’s 2019/20 defence if he keeps this up.

The Swede was immovable at the back and again played a crucial role in United’s build-up play. He is quickly becoming one of the best defenders in England’s top flight.

An unbreakable defensive performance and a heroic tackle puts Shaw in similar territory to Smalling for tonight’s proceedings. He continues a solid run of defensive form into next week’s all-important Liverpool encounter.

The midfielder struggled at times and entertained the idea of a sending off in the middle of the match but was ultimately able to avoid disaster and earn his six days of forthcoming rest.

A player who loves to torment Chelsea was wonderfully at the races once again, nullifying Jorginho’s efforts with brilliant timing in the press, making an unbelievably impressive 14 defensive actions, and scoring the winning goal with his head.

Two moments of breathtaking excellence for the two goals of the night capped off a marvellous performance from United’s talisman, who added seven defensive interventions to his almost unfathomably good attacking display.

Mata deserves praise for his intelligence and tempo-maintaining actions as United’s false nine and proved today that he can still be useful in a central role. However, much like Jesse Lingard, the player  for whom he was deputising today, his actions do not produce enough goals and assists for his position on the pitch.

Lukaku started the match with some added fire but lost his ability to influence proceedings as United receded further into their own half. He doesn’t seem to suit the system even though his qualities are still there.

Rashford’s cross for Paul Pogba’s goal was as incredible as his ability to keep Chelsea’s defenders busy tonight with slaloming runs, blistering pace and ability to cause trouble from wide and central areas.

Sanchez didn’t have much of a chance to influence the match barring one chance created for him by Pogba, from which he played a well-executed yet overcomplicated diagonal pass to Andreas Pereira that killed the attack. Giving him 10-15 minutes every match until the end of the season should be enough of a chance to prove himself, as he has no credentials to start based on his Paris Saint-Germain display.

He is capable of some spectacular moments, but too often Pereira seems too anonymous, struggling to assert any impact on the pitch when the ball is not at his feet. It is thus difficult to see him making it at this level, but like Sanchez, he should have until the end of the season to prove his quality.

Entered in the 93rd minute and didn’t have time to play more than two passes.