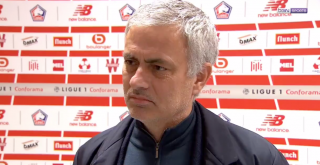 Since then, Ole Gunnar Solskjaer has come in as caretaker manager and completely turned out season around for the better.

The Norwegian’s impressive record as United boss – G12 W10 D1 L1 – has made him a front runner for the full-time position.

However, in United’s most recent outing Paris Saint-Germain came to Old Trafford and won the first leg of our Champions League last-16 tie 2-0, thanks to goals from Presnel Kimpembe and Kylian Mbappe. Paul Pogba was sent off and will miss the return fixture which is already an uphill climb for the Reds.

Speaking in French with beIN SPORTS over the weekend, Mourinho was asked if he watched United’s defeat against PSG.

But the 56-year-old simply said: “No. It’s hard for me to watch United, I prefer watching other clubs.”

He should give it a go. I mean, it’s a lot easier to watch than the football he threw up as manager.

Or maybe he’s such a virus that anything good in football is deemed bad?

It might also be the case that it hurts to reflect on his time at United, despite winning two pieces of silverware in his first season at the club.

In the same interview, Mourinho talked up managing in France. Just to keep his options open…

“I can imagine myself as a coach in Ligue 1,” he added. “I am a man who has worked in four countries. I like to know other cultures.

“Working in a new league would be a fantastic experience. For now I’m calm, I try to live better with my family and friends and I work calmly to hope for the opportunity to go back to football.”