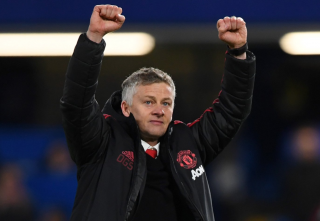 Manchester United moved through to the FA Cup quarter-finals with an immense performance at Stamford Bridge. Ole Gunnar Solskjaer’s side scored twice through Ander Herrera and Paul Pogba before half-time, and then managed the game superbly to win away to a top six side for the second round running.

The Reds will face another difficult away day at Molineux in the quarter-finals. Here are three things we learned at Stamford Bridge.

United’s winless run at Stamford Bridge had been one of the longest hoodoos in the club’s history, stretching back to 2012 under Sir Alex. The draw away in October ensured that the Reds had gone eleven games without a win at the venue coming into this one. Chelsea away has been the unhappiest hunting ground of them all for the Reds, but that was until Solskjaer’s side delivered an absolute masterpiece to pile more pressure on his opposite number Maurizio Sarri. The first questions were asked of Ole after the midweek loss to Paris Saint-Germain, but those were answered emphatically.

Every single player was absolutely top class and, even more impressively, it was a perfect riposte delivered without out two best players. It was a night that finally saw United deliver a long overdue win in SW6. Ole’s at the wheel!

Having knocked out Arsenal and Chelsea back-to-back, the Reds have now reached the FA Cup quarter-finals every year since 2015. United are chasing the twin ambitions of a top four finish and winning this cup, and with City the only remaining ‘big’ side left in the draw, you wouldn’t bet against the prospect of an all-Manchester final under the arch at Wembley in May.

This is the first season since 1985/86 that the Reds have completed a hat-trick of London wins of Spurs, Arsenal and Chelsea away from home in a single campaign. If United do go on and win, no one can say it was done the easy way.

Ole should get the job tonight

If there’s anyone out there who doesn’t think Ole should get the job of permanent Manchester United manager, please tell me why? It’s too simple now to say this is merely a new manager bounce. Solskjaer has shown serious tactical nous, superb game management and has squeezed every last drop out of bunch of unrecognisable players. He showed he’s learned from his mistakes against PSG, and deployed United in a diamond formation to stifle Chelsea’s creator in chief Jorginho. As Sarri struggled, Solskjaer soared.

This was the best performance by a United side I can remember for years. Every player, to a man, was absolutely unreal. Did anyone really think Solskjaer would have THIS much of a galvanising effect on the team? He should get the job permanent after this – or perhaps wait until we silence the Scousers on Sunday…