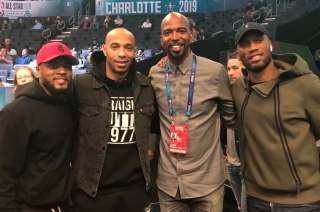 Patrice Evra documents his travels rather well considering he is one of the funniest professional footballers to follow on social media.

The high-spirited Frenchman makes his Instagram followers laugh regularly with his #ILoveThisGame posts, where he sometimes dresses in disguise and kisses raw meat.

Recent updates from his social media channels show Evra has been stateside to take in the festivities of NBA All-Star Weekend.

He was joined by fellow Premier League legends Thierry Henry and Didier Drogba.

Henry was recently sacked by AS Monaco after a brief period as manager, while Drogba has now retired and has plenty of time on his lands.

What better way to spend your time off than attend some basketball. I’ve never been to a sporting event in America, but it’s certainly on my to-do list!

Basketball wouldn’t necessarily be a sport I sit down to watch, but it would be a new experience. Maybe one day.