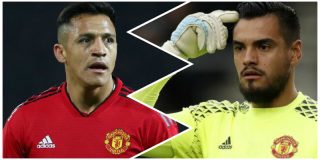 It is not too damning or critical an assessment of Alexis Sanchez’s time in Manchester to class it as an unmitigated failure. All the fanfare, euphoria and excitement when he joined last winter has been replaced by frustration and anger for the majority of his performances in a transfer that is proving costly for United.

In many walks of life, they say honesty is the best policy but, in the latest twist in his United career, Sanchez has perhaps been too honest for his own good. Fair play to Sanchez for opening up about his struggles in an interview, alongside Ander Herrera, currently featuring on the BBC website but a revelation within that has really not sat well with a lot of supporters.

Sanchez was a naturally attacking option to replace the stricken Anthony Martial and Jesse Lingard in United’s midweek defeat against PSG, on paper at least. That is without taking into the equation the fact that Sanchez was in fact injured in the most bizarre circumstances: A linesman collided with the warming up Chilean on the sideline, leaving Sanchez with heavy bruising.

In isolation, you would think that is desperately unlucky and sums up Sanchez’s time at United but there is a twist: Sanchez has admitted he confided in Sergio Romero of all people at half time and expressed doubts about how he could take to the pitch. Isn’t that just ridiculous? It implies that Ole Gunnar Solskjaer, the most critical man to be informed during that interval, was unaware of the injury.

Players down the years have certainly played through the pain barrier and it would have been a huge opportunity for Sanchez to influence a big game. He has been described as tenacious, determined and the street footballer type by those who know him best but why would you hamper the side’s chances, particularly still at 0-0, and put yourself above the team?

It struck me as an incredibly selfish gesture from a guy whose team player compatibility has been previously questioned at Arsenal.

Had Solskjaer been aware of the injury, perhaps he would have opted for a Romelu Lukaku or Diogo Dalot, especially with how the second half tactics panned out of putting crosses in the box.

Hindsight is a wonderful thing of course, but Sanchez has certainly not endeared himself to the United faithful and his display against PSG was the tipping point for many.

As it happens, Sanchez will probably need to be called upon, given Lingard and Martial’s injuries, however the likes of Angel Gomes, Mason Greenwood and Tahith Chong have all stepped up to first-team training lately.

In the grander scheme of things, Sanchez’s long contract and extravagant wages have left United with a Mesut Ozil type conundrum but it is clear that he has a long road to redemption ahead of him if he is to quieten the doubters and all the negativity.

Tuesday’s debacle will do little to silence all the noise.