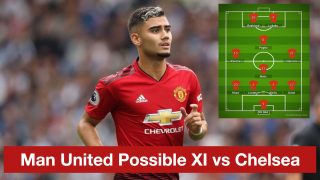 The desire to avenge Manchester United’s first loss under Ole Gunnar Solskjaer is as invigorating as the prospect of an FA Cup away tie at a domestic rival. The side will travel to London to contest Maurizio Sarri’s Chelsea on Monday with prospects of re-emerging after a difficult 2-0 loss at the hands of a wonderful Paris Saint-Germain outfit.

Sarri’s Chelsea, meanwhile, will have equally lofty ambitions, as despite their low-profile 2-1 win in the Europa League this week, the embarrassment of their 6-0 devastation at Manchester City last week will ring alarm bells for Maurizio Sarri’s job security at a club that does not know the meaning of said term.

The need for a reaction, squad rotation, and covering for injuries sustained in the midweek Champions League clash will prompt Solskjaer to choose a lineup likely similar to the following.

The Argentinean goalkeeper has played the majority of United’s domestic cup matches this season and the same can be expected for Monday’s clash. Romero can be relied upon when called into action, which is likely to happen at least once against a side of Chelsea’s quality.

Perhaps Dalot is a hopeful selection here, but Young’s performance during the midweek was disastrous and invited what was likely the key contribution to the tie from Angel di Maria and Kylian Mbappe. At some point, some United manager will have to begin to invest in the future and move on from the club’s currently declining group of average defenders. Solskjaer could be that man.

Now a staple in the United lineup, the defender has also become a crucial member of the side’s build-up play, starting attacks from the back and allowing the midfielders more space on the ball because the opposition have yet another player to press.

For one of the first times under Solskjaer, there are four defenders to be chosen from and thus it will be interesting to see who the Norwegian manager persists with. Bailly seems the ideal candidate to partner Lindelof after doing little wrong against Paris Saint-Germain. Playing these types of matches could be crucial to his development given that the young defender needs more high-end experience.

Plenty of criticism surrounds the left-back and it is quite baffling; Shaw is United’s best by a distance and his lack of end-product offensively is one of the few stains on his best season for the club. While he has had a few tough fixtures, he has been solid overall and will likely produce similar against Pedro.

What appeared to be a midfield masterclass in the opening minutes of Matic’s PSG cameo quickly unravelled as the midfielder later struggled to compete with Marquinhos and lost Presnel Kimpembe for the French defender’s set-piece goal. The midfielder will be working on improving upon his last few cameos with more solidity and less anonymity in possession.

Herrera continues to be one of the most influential players in United’s side and make his plea for a new contract. The tenacious midfielder will likely be tasked with man-marking Eden Hazard as he famously did in 2017, especially considering United’s current right-back situation.

While his sending off against PSG was likely harsh, Pogba was masterfully marked out of Tuesday night’s encounter as Marquinhos laid down a template on how to slow down the incredible 25-year-old. One advantage will be that he will get the rest he needs in a likely meaningless second leg. Pogba’s focus will be to prove that he can evade this challenge, and it will not be easy with N’Golo Kante on his back on Monday.

This role will likely go to Alexis Sanchez, but I could not fathom either the Chilean or Mata in Jesse Lingard’s absence as the former disappointed again and the latter’s performance provided further evidence that he does not suit the role. Pereira could be a hit in the right-wing/false nine position patented by Jesse Lingard, with his ability to deliver crosses from the right-wing and also move into attacking midfield, but he could also be anonymous. Whether Sanchez or Mata would make an impact is debatable anyways.

Lukaku would have been disappointed to sit on the bench and watch Sanchez and Mata disappoint in Anthony Martial and Jesse Lingard’s absence, especially given the fact that he tormented Sead Kolasinac against Arsenal and Kimpembe was on a yellow card. Coming up against the notorious Marcos Alonso on Monday should give the Belgian yet another opportunity to rediscover his form.

Rashford also has something to prove after struggling to make an impact in an important Champions League match. The fact that, at 21, he is one of United’s most important players in a tremendously vital role is as unfair as it is a testament to his potential, and ability to tear Chelsea apart on Monday.