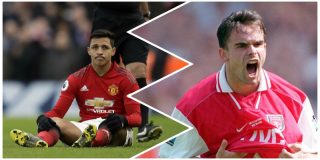 The Chilean has been a massive disappointment since signing for United in January 2018.

José Mourinho pursued a deal for the Arsenal talisman and the club gazumped rivals Manchester City by securing his signature, making Alexis our highest paid player on £350,000 per week, as reported by Goal.

We expected Alexis to replicate his best form at United but that hasn’t been the case, and it wouldn’t be a surprise if the club tried to sell him in the summer.

The problem, however, is finding a club that will pay Alexis the sort of money he’s on. Though you’d think a pay cut would be inevitable, so it could come down to the player’s decision.

But Ajax director of football Overmars believes his former club Arsenal would welcome Alexis because they’ve not managed to sign a player of his quality.

Speaking to ADN Deportes, Overmars said: “I have great respect for Alexis, because he did extremely well in Arsenal, I do not know if it was a good decision to leave.

“English football changes you, it turns you around, it took me a step forward.

“Arsene Wenger arrived a year before me, Dennis Bergkamp made a big impression in England, it was a fantastic time. I think we changed the history of the club a bit.

“This type of players were very important for Arsenal, because that’s where they take you to focus.

“After Alexis, Arsenal tried to sign another player like that, but he was not given, so he could go back to Arsenal.”

I can only assume Arsenal fans reading that are delighted Overmars, albeit a club legend, is not their director of football.

He is ultimately talking about Alexis in the past tense. Yes, Arsenal and most teams could do with a player of that calibre, but he’s not at that level anymore. Unfortunately…

With most of United’s attacking players flourishing under new management, Alexis is still struggling, so his apparent troubled relationship with José Mourinho cannot be to blame for the forward’s shortcomings. Or will he soon take an issue with interim boss Ole Gunnar Solskjaer?

The Chilean has lost a yard of pace and is one of the main culprits of giving away possession far too easily. We keep giving him chance after chance and must demand a significant improvement between now and the end of the season.

United take on Chelsea in the FA Cup on Monday night. Don’t be surprised to see Alexis in the starting eleven after Solskjaer ruled out attacking duo Anthony Martial and Jesse Lingard.