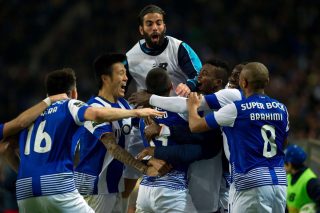 Aged 29, this is not a new kid on the block. He has been at Porto since 2014 after joining from La Liga side Granada.

The Algeria international plays on the wing or across attacking midfield positions and has scored 45 goals in 171 appearances for the Portuguese giants.

You might be asking why on earth are clubs like Arsenal and United tracking a 29-year-old when these clubs usually tend to sign younger players. It helps that he is set to depart on a Bosman deal with his current deal set to expire in June!

That would explain the flurry of interest for Brahimi’s signature.

Arsenal, Manchester United, Everton and Wolves make up the quartet of clubs willing to sign Brahimi this summer.

Manchester United signed Diogo Dalot from FC Porto last season. A signing made by former manager José Mourinho, the young full-back should be a future star at Old Trafford.

This season he is settling into English football and has done well, though it is telling that Ashley Young still starts the majority of games at right-back.