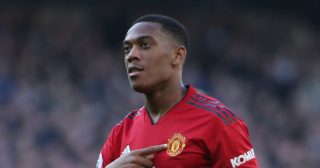 Some Manchester United fans suffered a fright on Friday afternoon following a tweet from Anthony Martial.

Martial’s journey has had bumps along the way but he currently looks at his happiest after signing a five-and-a-half year deal to commit his long-term future to Old Trafford.

He looked a talent from the moment he came in under former manager Louis van Gaal, but Martial found life harder under his predecessor José Mourinho.

The Guardian reported in the summer that Mourinho had considered selling Martial to an overseas club, though many United fans are thankful that never materialised. This explained why Martial’s time on the pitch had been cut.

But all of that chance when Ole Gunnar Solskjaer came in as caretaker boss.

The France international is now a key player at United again, contributing with goals and smiling like never before!

Although it was totally unintentional, Martial shared a tweet in French that had some fans thinking for a second he could be leaving.

Monaco now face a relegation battle after a shocking start to the season, something Vasilyev is partly being held responsible for.

His sacking prompted Martial to take to social media to personally thank Vasilyev for ‘A big step in my career’.

The tweet included a photo – which comes with a twist.

Martial and Vasilyev are both holding a Monaco shirt with 2019 on the back. It was enough to make you look twice, close your phone, and immediately reopen the Twitter app for another glance.

Just to be double sure Martial had not gone AWOL and returned to his former club to save the day.

Ruled out for Chelsea clash in FA Cup

Manchester United will be without Anthony Martial for their FA Cup clash at Stamford Bridge on Monday.

The Frenchman came off against PSG during the week after picking up a knock, as did teammate Jesse Lingard, who is also ruled out of the cup tie.

Another evening trip to and from London for United fans furthering proof the broadcasters couldn’t care less about football fans. Hopefully, the Reds do the business.