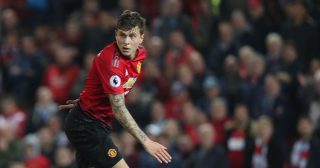 Manchester United defender Victor Lindelof has admitted he can lose his cool after defeats.

That would have been the case the for Swede on Tuesday night as United lost 2-0 at home to Paris Saint-Germain at Old Trafford.

Lindelof was partnered by Eric Bailly in the heart of defence and has been our most in-form defender all season, improving massively on his debut campaign when he rarely started games.

He has appeared 27 times in all competitions this season and scored his first goal for the club in a dramatic 2-2 comeback against Burnley.

While Lindelof should be enjoying his form of late, the odd defeat can still make him quite mad.

“I hate losing – that’s the worst thing I know,” Lindelof told ManUtd.com. “I always want to win so, after a loss, I can be quite mad for a while and my wife knows that!”

I’d imagine most of the lads react this way after a loss considering it’s their career they’re playing for, not to mention letting the club and fans down. There’s a bigger responsibility being a Manchester United player.

“She won’t speak with me for a little bit when I get home [laughs],” he continued. “But I also think it’s important to let it go too. It’s okay to be angry but, after a few hours, you have to move on and I’m very good at doing that.

“I’ll say ‘Okay, that’s now in the past, let’s move on and look forward to make sure it doesn’t happen again. I love to win, but it’s the same thing, you’re happy for the win but, the day after, you then have to look forward and work hard for the next game.”

It was difficult for fans to really take to Lindelof as a new signing last season. Jose Mourinho didn’t play him regularly as he probably felt the defender needed time to adjust to the English game and wasn’t ready, but he’s been a rock at the back for us this term.

The 24-year-old also revealed how he and his wife are finding life in Manchester.

“I like it a lot,” he said. “I really like the people here, they’re very nice. There are some good restaurants and places to go, and you have everything you need.

“I live a bit outside of town and it’s very beautiful there. It’s important for me that my wife likes it here too, and she really enjoys it.”