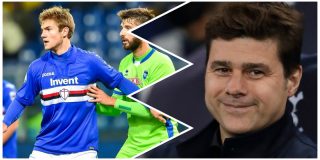 A report from Calciomercato claims Tottenham met with Sampdoria vice-president Antonio Romei on Wednesday to discuss a potential deal for defender Joachim Andersen.

The 22-year-old could cost Spurs around £22 million if a deal is to be struck.

Andersen could be a potential replacement for contract rebel Toby Alderweireld, who was strongly linked with a move to Manchester United in the summer, as reported by the Daily Star.

An experienced defender like the Belgian international could be the missing part of United’s jigsaw, though it is understood that Napoli centre-back Kalidou Koulibaly will be our prime target, as noted by ESPN.

I think Alderweireld would have made a big difference at United this season had we signed him in the summer, but the prospect of landing Koulibaly, one of the best defenders in the world currently, has far greater significance.

Sometimes you need to buy the very best to become the best.

But according to the Mirror, Juventus and Inter Milan are both prepared to gazump Spurs by signing Andersen, so it is not just the Premier League club who believe he’s ready for a big move.

It could be that Mauricio Pochettino is preparing for life without Alderweireld if they’re seeking defensive reinforcements this summer.

And, nobody at Spurs knows for sure that Pochettino will be at the club next season.

Nobody knows for sure if Manchester United will continue their pursuit to sign the Spurs defender.