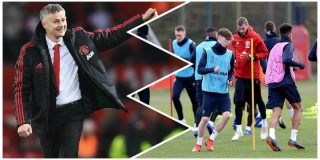 Ole Gunnar Solskjaer faces a bit of a selection headache ahead of Manchester United’s FA Cup clash with Chelsea on Monday night.

Jesse Lingard and Anthony Martial both came off injured against PSG in the midweek defeat, topped off by Alexis Sanchez and Romelu Lukaku in dire form.

Beating Chelsea in the cup will go a long way in building hopes for silverware this season, so Solskjaer will select the team he thinks will beat the hosts and progress in the competition.

At the moment neither Alexis or Lukaku could be deemed reliable and the manager may look to make a big call to, hopefully, increase United’s chances of winning the tie.

According to CaughtOffside, Solskjaer will strongly consider giving a debut to youth team sensation Mason Greenwood.

The 17-year-old is an outstanding prospect and if current first-team regulars aren’t cutting the mustard, why not give a talented youngster like Greenwood a chance to shine?

Manchester Evening News previously claimed Greenwood was close to a first-team debut, and now we’re talking about it coming in the FA Cup at Stamford Bridge.

Should it happen what a night it would be to make your debut. We certainly welcome the idea after watching some of his performances in the youth teams this season.