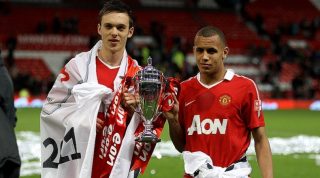 Ravel Morrison believes an unfair bad boy reputation was behind his downfall at Manchester United.

Morrison was the most talented player out of a strong youth team consisting of Paul Pogba and Jesse Lingard, so it must make him think where it all went wrong.

Since then Pogba has won a World Cup as well as domestic titles in Italy, while Lingard has scored for United in cup finals. The sad truth is Morrison should be spoken about in the same light as those players today.

The decision to move Morrison on from United was made by Sir Alex Ferguson, who insisted that he moved away from Manchester.

He has since played for QPR, West Ham and Lazio and has recently signed for Swedish side Ostersund.

Morrison spoke to the Times about his reputation from his teenage years and pleaded his innocence.

“It was always ‘Ravel’s done this, Ravel’s done that,” he said. “The one thing I took was a pair of football boots that the player didn’t wear any more. But watches? Phones? That was ridiculous to say.”

When Morrison was at United, rumours did the rounds that he was a dressing room thief. That’s clearly what he is referring to above.

“There were times when I did something wrong, but often it was just wrong time, wrong place, wrong crowd and it wasn’t even me doing something.

“I don’t go out drinking, getting p*****, causing trouble, drink-driving, smoking, taking drugs. Other players get away with those things.

“Can you imagine if I was done for drink-driving? If I do something, it sticks against me for ever. I made mistakes when I was young, but it’s nearly ten years ago. Everyone makes mistakes when they’re young.”

It really is a shame things didn’t work out as planned for Morrison.

Not only would he have benefitted, so would Manchester United. He was that good.

Rio Ferdinand labelled Morrison the “most gifted” youngster he had seen, as quoted by The Mirror.

“He possessed as much natural talent as any young we ever signed, but he kept getting into trouble.

“It was painful to sell him to West Ham in January 2012 because he could have been a fantastic player. But, over a period of several years, the problems off the pitch continued to escalate and so we had little option but to cut the cord.”