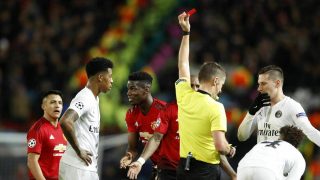 Tuesday’s 2-0 defeat at home to Paris Saint-Germain means the Reds need to win the return leg in Paris at least 3-0 to qualify for the quarter-finals, a feat few are talking about following a disappointing night at Old Trafford.

It doesn’t help that we’ve been handed this task and have to do with without Paul Pogba, who is out of the second leg after receiving a red card on the back of two yellow cards.

READ MORE: Man Utd’s need for a Director of Football is clear, so why does the long wait go on?

Caretaker manager Ole Gunnar Solskjaer jumped to Pogba’s defence after the match by saying he didn’t mean to catch Dani Alves’ knee when he tried to shield the ball away from the Brazilian.

“He is trying to get his body across and Alves is clever enough to put his foot in, so it hits him,” Solskjaer explained, as quoted by the Express. “I know Paul wants to shield the ball and it’s unlucky and it hits him on the knee.”

Pogba was clearly annoyed with himself as he walked towards the tunnel after being sent off by referee Daniele Orstato. The official had a mare of a night at Old Trafford, letting Marquinhos away with more than one sending off offence, but making sure not to give Pogba the same amount of leeway.

According to The Sun, upon arrival to the dressing room Pogba punched his locker repeatedly before apologising to his teammates for being sent off.

The France international would have been looking forward to the second-leg in Paris, but there is nothing that can be done about that now.

The Sun also claims that Solskjaer gave the players a hairdryer treatment after the match. A source reportedly told the outlet: “Ole told them that they tried to play the game as if it was a one-legged tie. He had told them to remain patient and not to concede easy goals.

“And they then went and conceded from a relatively easy set-piece and everything just went downhill from there.”

Pogba, clearly upset about missing out on the return fixture, was left feeling angry at full-time.

“Pogba was distraught and he apologised to all of his teammates,” the unnamed source continues.

“He felt as if he had let them down and he is now gutted to be missing the second-leg. He banged his locker in anger several times.”

It was the first time Manchester United suffered defeat under Solskjaer, and everyone now hopes to respond with another winning run to help ensure qualification in the FA Cup and the Champions League next season.

“The players were so deflated after the game – they have not felt that bad since the time Mouriho was in charge.

“Ole tried to keep them optimistic about the second-leg. He told them that they have to remain positive because in football anything can happen.”