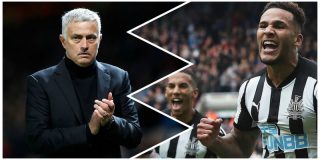 José Mourinho had identified a Newcastle player to add to his defensive targets prior to being sacked as Manchester United manager, according to reports.

The Portuguese tactician was axed with the team positioned sixth in the league, 11 points adrift of the Champions League spots, after a disappointing start to the season which began with Mourinho’s dour demeanour.

We can only assume he was annoyed by Ed Woodward’s incompetence after failing to secure a defensive signing in the summer.

Mourinho had already signed two centre-backs since becoming United boss. Eric Bailly, who he fell out with and Victor Lindelof, who he constantly overlooked in his first season at the club.

Perhaps that was the reason behind Woodward not trusting Mourinho with more defensive signings, although Lindelof has kicked on since Ole Gunnar Solskjaer’s arrival as caretaker manager.

However, ESPN now claim Mourinho was expecting to sign a new centre-back during the January transfer window.

They mention Newcastle centre-back Jamaal Lascelles as a surprise name to be added to United’s list of transfer targets.

Time will tell if United remain interested in the 25-year-old following Mourinho’s sacking. We’ve already changed our style of play drastically with the new man in charge.

ESPN claim sources revealed he will remain a target at the end of the season.