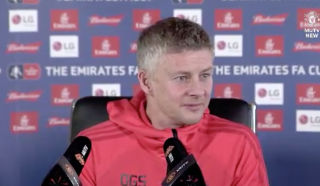 Jesse Lingard and Antony Martial were both substituted against Paris Saint-Germain during the week and they now face two to three weeks out.

Solskjaer says Jesse Lingard and Anthony Martial are out for two to three weeks. Mason Greenwood, who might’ve travelled to Chelsea, is also out injured. #mufc

That means Solskjaer will be without the two attacking players for United’s FA Cup away tie at Chelsea.

While most will consider that a big blow for the Reds, it could give some players from the youth team a chance to make a name for themselves.

The Norwegian coach confirmed that Mason Greenwood is also injured, so the 17-year-old must wait to make his first-team debut. Instead he mentioned that Angel Gomes and Tahith Chong could make the squad for the trip to Stamford Bridge.

It would have been great to have seen Mason Greenwood given a debut on Monday night, but he’ll just have to remain patient. Chong and Gomes are two very creative players and we’d like to see them get a run against Chelsea in the FA Cup.